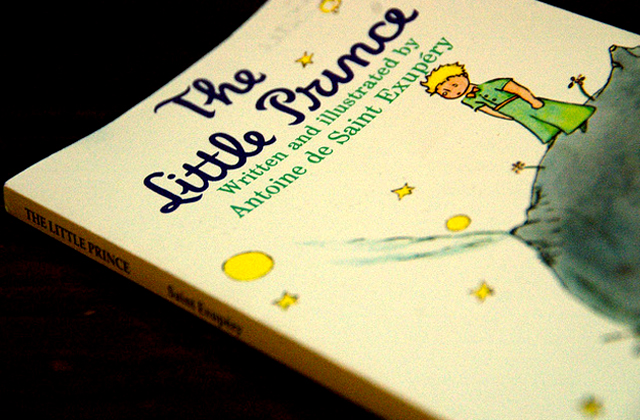 In my childhood, when I watched the tiny wooden toys, petite on the souvenir stall, I’ve always believed that exists inside of the shells that are carved exquisitely prepared, sure to be a soul. I, with the same mindless silly to other children, had always longed at times when parents are away, there will be a tiny toy boy named Prince, the other from the United Nations come to me and they I’ll do you. Someone, just “The Little Prince” …
Antoine de Saint-Exupéry – writer of stories about the sky, the universe, far from the ground what made me the most, as well as many other readers relive his childhood years through character “Prince baby “in the novel of the same name. In fact, the first book of Antoine de Saint-Exupéry’s book that I read “Origin of man”, her best friend gift donated before my suitcase up and back to Europe. But it’s a cocoon book reader with emotion and volume of information enormous, but maybe you need to experience and understand life feel all very new. “The Little Prince” is the opposite, concise language, connotation, easy to understand, anyone can read, just that children and adults will be thinking the same book in two different ways. And that is the genius of the master subtle style of Antoine de Saint-Exupéry. It did not make the simplest is the culmination of that star art.
Little Prince lived on the planet sub B612, and heard strange or ridiculous right? But the words that he told the world that, after the pilots rejected both aircraft crashed into a desert. This man may be the metaphorical image of the author. Two doctors grandchildren happy conversation though initially rejected the other pilots marveled identity, shape and origin of tiny little friend. Prince told him that his planet has three volcanoes and a rose. The two tops are active, a flame is off and there is also the flower of his love. You care for your planet so very carefully. Day by day, one day, he decided to take your son to see the rest of the universe. That must be very brave decision by the child as he would have to leave flowers. Oh, he was afraid of sad flowers.
Go through each planet he saw people different oddly. But strangely, like him, they are alone on his planet. Only to Earth until the new boy wonder. He saw millions of rose garden rather than just a love of his flowers. He saw billions of people who live and compete together under one sky. He exchanged his questions with physician and physician pilot tried to talk to him a most understandable way. They became two soulmates, shattered the age gap, geography, astronomy. Little Prince he truly loved old friend, and vice versa, the other doctors, too. Everything will be very fun and unforgettable if in the end the novel, a sad thing happened. It was not the huge suffering of the pilot or his uncle Little Prince. It’s just something vague, gentle, melancholy alone. But my friends, there are things to break up hundreds of pieces and scattered, that’s when it cut into my heart the most pain.
Antoine de Saint-Exupéry was used a lot of metaphors throughout the novel for the first throne after the wording just as witty, just lovely from his words of The Little Prince. “If so, then we ordered the people are yawning. How many years I have not seen anyone yawn before. Yawn is now worthy of me curious story. Yawn yet come, we ordered it, “which is told by the Little Prince on his conversation with a king and that. His silly humans as well as the Earth. Captious, but pitiful style when his detention on an immense loneliness. Or as full sentence considerate when talking about adults: “The children we must be very lenient with adults there, my friends,” “I will humble to say things just reach him. Speaking of gambling, golf, politics and stories chosen tie. The other adults proved very pleased to know a human character in moderation. “
Whatever you are, your age, claims or not, please see my article a plea, that read this book away. It’s very short, but contains a lot of things that we have thoughts about childhood, about growing up, about life or about anything else can exist on this Earth.